Abdominal viscera are suspended in the peritoneal cavity by the mesenteries. It is positioned between the cavity and the musculoskeletal wall. Abdominal anatomy includes a major element of the gastrointestinal, system, the caudal end of the oesophagus, stomach, large and small intestine, liver, pancreas and the gallbladder. It also contains the spleen.

The component of the urinary system, kidney and the ureter. It also contains the suprarenal glands and the major neurovascular structure are present in the abdominal viscera. The anatomy of abdomen also tells about the viscera of the abdomen.

Functions of the abdomen

Anatomy of abdomen tells us about its boundaries as well. Roof, floor, anterior wall and posterior wall forms the boundary of the abdomen.

Roof: – undersurface of the diaphragm from the roof of the abdomen which moves up and down during breathing and changes the abdominal pressure.

Anterior wall: – It is formed by the three muscles which are flat and by their aponeuroses. They are rectus abdomens and pyramidialis muscles within the rectus sheath. The anterior wall is elastic & firm which provides protection to abdominal viscera.

Posterior wall: – various retroperitoneal organs, main vessels and nerves is present in the posterior wall. It provides support & nutrition to the various organs by the attachment of various peritoneal folds.

What do we mean by abdominal cavity?

One of the major viscera of the abdominal cavity is the stomach. Here you can learn the anatomy of stomach with its function.

The stomach is one of the largest parts of the digestive tube. Its shape is just like an alphabet“J” and is located in the abdominal cavity just below the Diaphragm little bit left of the midline. The volume capacity stomach in the adult person is about 1500 ml.

The major functions and the activities carried out by the  stomach are as follows:

The  three parts of the small intestine are

The jejunum is the remaining upper two fifth part of the small intestine and the lower three-fifth is termed as the ileum.

The main functions of the small intestine are digestion of food and absorption of nutrients. It’s all about the anatomy of intestine with it’s function.

Large intestine is one of the largest parts of the abdominal cavity. anatomy of large intestine deals with many organ which are listed below with their details.

The large intestine starts at the end of the ileum as caecum and ends at the anus. Its length is about 1.5 m long and forms an arch coiled around the small intestine. It can be described as it is divided into the following seven parts:

The main functions of the large intestine are as follows:

The liver is one of the largest gland present in the abdominal cavity of the body.

Where is liver located?

It is situated in the upper right part of the abdominal cavity. It has two major lobes i.e right and left. The right lobe is much larger than the left lobe. Dealing with its location, function includes all detail about the anatomy of liver.

Functions of the  liver

Some important functions of the liver are as follows:

It is situated on the inferior surface to the right lobe of the liver. It receives bile secreted by the liver, which it stores and concentrates. When fatty food enters the duodenum, the bile is poured into the intestine through the bile duct by the contraction of the walls of the bladder.

Clinical note related to  the   gallbladder

The pancreas is an elongated lobulated and soft, pale gland. it is a finely lobulated gland. It is grey in colour. It is about 12–15 cm long and situated transversely across the posterior abdominal wall. It has got a  broad head, neck, body, and a narrow tail.

let’s start anatomy of pancreas wit its head. Head of the gland is present within the duodenum curve, the body is present behind the stomach and tail is present in front of the left kidney. The tail goes as far as to the spleen.

Clinical note for the pancreas

The spleen is a large wedge-shaped mass of vascular and lymphoid tissue. It is purplish-red in colour and lies high up at the back of the abdominal cavity on the left side behind the stomach.

The main functions of the spleen are as follows:

This is all about the anatomy of spleen with it’s functions.

The anatomy of kidney begins with its shape and its location. The kidneys are in bean-shaped.

It is present in pair and it is an organ situated on the posterior abdominal wall, one on each side of the vertebral column, behind the peritoneum. The right kidney is present usually at a slightly lower level than the left kidney.

The ureter is part of the pelvic cavity there are two tubes through which connect the kidneys to the urinary bladder. Both ureter is about 25 cm in length and  having a diameter of about 3 mm.

It is also one of the important glands of the abdominal cavity. Two suprarenal glands they are right and left adrenal glands. Both glands cover the upper pole of the corresponding kidney.

The right gland is triangular in shape  whereas the left gland is semilunar(half moon like) in shape. Each gland consists of two parts:

They are cortex and medulla.

The function of the cortex is to secrete a number of steroid hormones, which are responsible for:

The function of the medulla is to secrete adrenaline and noradrenaline in the blood, which serve as neurotransmitters. The anatomy of the adrenal gland is discussed detail in the next post. you can read it in the post of the anatomy of the kidney.

The urinary bladder is the part of the pelvic cavity. It acts as a reservoir of urine. Its size, shape, and position varies with the amount of urine present there.

When it is  empty it lies in the pelvic cavity, but when it get distended with the urine it expands upward and forward into toward abdominal cavity. The bladder can hold normally up to 500 ml to 600 ml of urine, though this causes pain and also may lead to severe anamolies in future The desire of  the bladder is normally felt when it contains around 250–300 ml of urine.

The two ureters enter into it through its posterior wall.

In a male, the urethra length is about 18–20 cm long and in a female, length of urethra is about 4 cm long.

The prostate is a fibrous and Muscular gland commonly know as fibro-musculoglandular organ, which helps to surround the commencement of the urethra in the male.

It is situated in the pelvic cavity behind the pubic symphysis and in front of the rectum. The size of the prostate gland is about chestnut and which is traversed by the urethra and ejaculatory ducts.

The function of the prostate is to secrete a thin, milky fluid, which forms about 30% of the semen and gives it a milky appearance. The prostatic secretion is alkali in nature and provides nourishment to the sperms.

The seminal vesicles are two small fibromuscular pouches lying between the base of the bladder and the rectum.

The seminal vesicles secrete an alkali containing fluid which also contains nutrients for the sperms and forms about 60% of the seminal fluid.

The duct of seminal vesicle and ductus deferens unite to form the ejaculatory duct. They traverse the prostate gland to open into the urethra within the gland (prostatic part of urethra).

The ejaculatory ducts pass the secretions of testes and seminal vesicles into the prostatic urethra.

The uterus is a hollow, having thick-wall present and the muscular organ which is situated in the pelvic cavity in between the urinary bladder and the rectum.

The anatomy of uterus mainly deals with its shape because shapes really matter for any disease conditions and other issues. Its shape looks like a pear and it is flattened anteroposteriorly.

In the majority of women, uterus leans forward (anteflexion) and bends forward (anteversion) almost at a right angle to the vagina. In the erect posture, the uterus lies in an almost horizontal position.

The uterus is divided from above downward into following three parts:

The cervix moves  into the vagina through its the anterior wall and reaches into it at the external OS.

The functions of the uterus after puberty are:

The vagina is a fibrous and muscular tube known as fibromuscular which extends obliquely downward and forward from the uterus to the vestibule of the vagina the elliptical space between the labia minor and labia major.

The functions of the vagina are as follows:

There are two uterine tubes. Both  tubed is about 10 cm in length which extends from the side of the uterus which means between the fundus and body to the ovary where it opens into the peritoneal cavity.

It is divided into the following parts from distal to the proximal end:

The functions of uterine tubes are as follows:

The ovaries are female gonads. Each ovary is about the size and shape of an almond and is situated in a shallow fossa on the lateral wall of the pelvic cavity behind and below the distal end of the uterine tube.

The ovaries start its function at puberty and continue to discharge the ova every month from about the age of 13 years old to the age of 45 years. we have completing discussing all the detail of the anatomy of abdomen. now you need to know about the regions of the abdomen.

Regions of the abdomen

The nine regions of abdomen are:

Some of the disorder Related to the abdomen and the pelvic are:

If you are aware of the anatomy of abdomen then you can distinguish the disorders present in the individual. Anatomy of the spinal cord 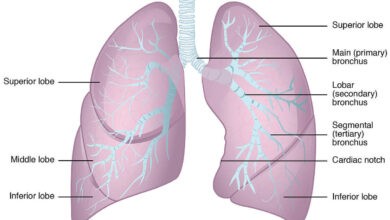